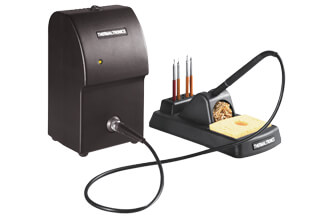 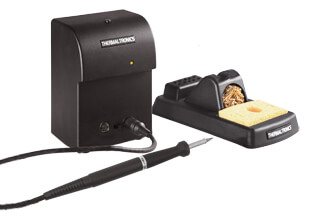 Soldering stations Thermaltronics
The basic part of the Thermaltronics soldering system is the cartridge, which is the heating element and the tip at the same time. The principle of operation of soldering stations is based on induction heating of the cartridge, which is made of copper with a ferromagnetic coating. In Thermaltronics soldering stations, an induction coil is located directly on the tip of the cartridge, where a permanently acting alternating magnetic field is created. The cartridge temperature is adjusted by changing the Curie point of the ferromagnetic alloy tip. At the moment of contact of the tip with the soldering point, its temperature changes depending on the heat capacity of the soldered joint, after which energy is replenished with a magnetic field to stabilize the temperature at the Curie point
Smttech uses cookies to improve and customize your experience on our website. By browsing further, you agree to our use of cookies.
Read our Privacy Policy to learn more.
reject accept
X
Privacy Policy
We never sell personal data and we carry out all processing operations in strict compliance with the EU General Data Protection Regulation (GDPR). Cookies are stored on your individual device and you have full control over their use. You may deactivate or restrict the transmission of cookies by changing the settings of your web browser. Cookies data that are already stored may be deleted (only if you are a registered user or provide us with the full cookie identificator) at any time by appealing to our support team — info@smttech.ru. If you visit SMTtech site with cookies deactivated, you may possibly not be able to use all of the functions of our site to the full extent. You will not be able to opt-out of any cookies or other technologies that are “strictly necessary” for the functioning of our website and services. You can exercise any of the rights mentioned in this Privacy Policy in your Account and/or by contact with SMTtech team info@smttech.ru: Where you have provided consent, you may withdraw it at any time, without affecting the lawfulness of the processing that was carried out prior to withdrawing it. Whenever you withdraw consent, you acknowledge and accept that this may have a negative influence on the quality of the SMTtech Site and/or Services. You further agree that SMTtech shall not be held liable with respect to any loss and/or damage to your Personal Data if you choose to withdraw consent. Where Personal Data is processed for the above purposes on the basis of SMTtech legitimate interests, under the GDPR, you may object to such processing at any time. To do so please contact: info@smttech.ru. You may opt-out from having SMTtech collect your information when visiting an SMTtech Enabled Site at any time by contact with or SMTtech support team: info@smttech.ru.
Request a call
Request a call